Death of Medicine in Nazi Germany

Dermatology and Dermatopathology under the Swastika
Ardor Scribendi, Philadelphia 1998 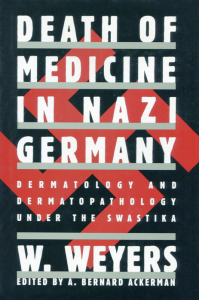 The death of Medicine in Nazi Germany is an important book, timely, well written, well researched, beautifully illustrated, and with it all, a fascinating read. I recommend it highly.

Dr. Weyers has written a seminal, analytic history of German medicine during the years 1933-1945, and he describes with clarity the behavior of the German medical profession to Jewish colleagues, in particular, dermatologists. He also writes painstakingly and heartwrenchingly of their fate. The book is organized in a logical and scholarly manner. I recommend this book to dermatologists, other physicians, and interested lay persons with enthusiasm. It is fascinating reading – and much more.

Weyers’s documentary account takes the reader through a “Who’s Who“ of medicine in the 19th and 20th centuries. … This book should be required reading, because it recalls the tragedy of German medicine during a time when prejudices and hatred overcame reason, let alone the Hippocratic oath.

What makes this volume so unusual is its meticulous scholarship, coupled with the absolute integrity of a contemporary German gazing courageously at his own roots. He proceeds as might a forensic pathologist, dissecting the unconscionable behavior of the guilty, while dispassionately exploring both the roots  and insidious progress of National Socialism. Rather than look at the problems of National Socialism in the usual historical or psychosocial context, Dr. Weyers examines the practice of medicine under the Nazis. Medicine may be the most appropriate filter through which to review the National Socialist phenomenon because the Nazis saw themselves as physicians to the German people.

Wolfgang Weyers, a dermatopathologist in Freiburg, Germany, has performed a splendid service both for medicine and for his own specialty. … Weyers chronicles the careers of all the prominent dermatologists during the Nazi period. This is a substantial contribution to medical history. We learn about the physicians’ discoveries and achievements and their subsequent professional lives. The outstanding doctors who were dismissed from their jobs or hounded out of Germany are thereby not forgotten. This history is accompanied by numerous photographs and an extensive and detailed glossary of dermatologic terminology and concepts. … This book deserves a wide reading among dermatologists and other physicians.

Dr. Weyers’ monumental and unforgettable study contains biographical sketches of hundreds of physicians, many of whom are well-known, a myriad of previously little-known facts and statistics, nearly 400 pictures and illustrations, and 50 pages of detailed footnotes, references and indices. It is painful to read Death of Medicine in Nazi Germany; nonetheless, it should be required reading for every physicians and medical student.

Wolfgang Weyers’ Death of Medicine in Nazi Germany not only remembers, but places before us in compelling and dispassionate language, as if echoing the cool impersonal words that sent millions to their deaths, an eloquent human testimonial to an obscene moment in history. … Dr. Weyers leads us along, step by step and page by tragic page, each anecdote and personality an escalation built upon those that came before, to a crescendo which no one who has read this book is likely to forget. The fascination lies in the details, both of personality and of incident. … Dr. Weyers has included numerous photographs, which dramatically complement the text. Most arresting, however, are the portraits, the names of many of whom still grace the textbooks of our time as a result of their work. In these images we see the actual face of a moment in time when decisions and choices of an almost intolerable sort had to be made by real people. The faces are the faces of ourselves, and they ask us who we are, and what we would stand for. This is a book that not only every physician should read, but a book for everyone who reads.